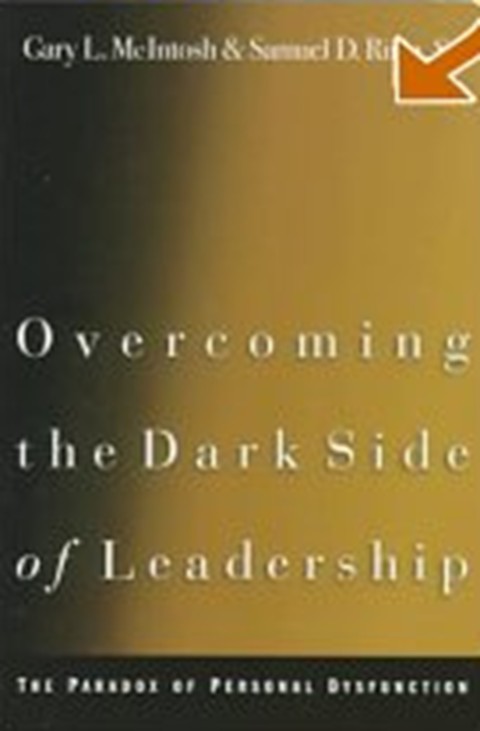 Overcoming the Dark
Side of Leadership”

This book should be read by any and every leader. It deals with a part of leadership which is very rarely discussed and in some cases ignored altogether. Although they never use the metaphor, the “dark side” which they discuss is an ever-present reality which influences every decision we make and everyone around us – similar to the dark side we’ve come to know from the Star Wars films. They describe it like the dark side of the moon, it is a part of our very essence and helps to make us who we are. This dark side is defined by our
natural tendencies to fill the voids left by our weaknesses and deep hurts from past experiences. The dark side is how we’ve learned to cope with life. Unfortunately, these habits (healthy or not) continue to be lived out after we become Christians and begin leading others. Throughout history many leaders have been overtaken and many great ministries/organizations have been ruined from the influence of this dark side. Gone unchecked, we risk much in our lives by ignoring its’ existence and influence. This book provides the reader with the tools necessary to understand, recognize, and redeem his/her own dark side. The church would benefit greatly if church leaders were aware of this reality and guided others in cautiously heeding its’ warnings.

Understanding Our Dark Side

The first section of the book is mostly an extended definition of what this dark side truly is. The authors are very meticulous about sharing both their own personal interactions with this presence in their lives and those of other famous leaders throughout history. They describe those who have dealt properly with the dark side like Bill Hybels and the Apostle Paul and those who have been overtaken by it like Jim Bakker and King Saul. All of these stories combine to paint a picture of the many varied forms this dark side can take on in one’s life. They describe how pressures can build within a leader and eventually our dark side emerges with an explosion of emotion or frustration. “At times the dark side seems to leap on us unexpectedly. In reality it has slowly crept up on us. The development of our dark side has been a lifetime in the making.” (pg. 22) They also attempt to break down the dark side into its building blocks so the reader can more readily recognize it while it’s being built. The building blocks they mention are pride, selfishness, self-deception and wrong motives. (pg 40-45) In addition they describe many of the signs of the shadow side as: (1) an inexplicable drive to make a significant mark with our lives (2) a profound need to be approved (3) an irrational fear that our work is inadequate (4) a need to feel in absolute control (5) perfectionism (6) many other behaviors such as overeating, compulsive spending, alcoholism, compulsive exercising, etc. (pg 50-51) In describing the development of our dark side, the authors refer to Abraham Maslow’s hierarchy of needs or as it is sometimes called the “needs pyramid.” This pyramid builds from physiological needs, to safety needs, then love needs, esteem needs, and finally self-actualization. Maslow’s theory is that people must have their needs met at one level before they can get their “higher” needs met. The authors of this book suggest that sometimes we get those needs met in unhealthy ways, and this becomes the seed for a growing dark side which has learned to satisfy itself in ways that God never intended. As one grows older these behaviors become habits and will eventually explode into a full-blown dark side.

Discovering Our Dark Side

The second section of the book describes five different types of dark side leaders. It details their characteristics and then offers a self-test to the reader to determine his/her potential for falling into this category.

The compulsive leader is symbolized by Moses who felt the need to control every aspect of the Israelites movement out of Egypt – even to the point of being a judge over every matter between the people (numbering millions). These leaders tend to think they are the only ones who can do the job correctly and therefore have a hard time delegating. They also develop highly structured systems which must be followed in the minutia. Many times, this makes them workaholics. In an effort to maintain control, they will repress anger and emotions which can erupt in sudden violent outbursts and then be quickly controlled again. They also have a tendency to be very critical and enjoy the freedom the church gives them in seeking “excellence” in ministry.

The narcissistic leader is more like Solomon. Scripture is clear that he thought the world revolved around him – he did many things “for myself.” They use other people to advance their own agenda and find it difficult to recognize the efforts of others – often times taking the credit themselves. Deep feelings of inadequacy and inferiority motivate them to work/minister for the approval and admiration of others rather than for God.

Saul is a great example of the paranoid leader. He was hypersensitive to the actions and reactions of the people, always fearful of potential rebellion. These leaders are intensely jealous of other gifted people because they are so insecure in themselves. They overreact to criticism and tend to believe there are ulterior motives into the most innocent of actions. They love to keep their hands on every area of the organization and therefore require lots of meetings and reports. They also keep a “safe distance” when it comes to relationships because close relationships require a transparency which they fear will potentially undermine their leadership.

The codependent leader is represented by Samson. He continually involved himself in self-destructive behaviors. These leaders are masters of denial – even to the point of believing the denial to be truth. They have a serious need to please others and don’t want to disappoint anyone. They repress their emotions and feel stressed as a result. They also don’t initiate action to confront misbehaviors because they have learned to live with them, but instead will sometimes even take personal responsibility/blame for others actions. Codependent leaders often appear to be extremely loving peacemakers, but this can go too far and enable unhealthy or unbiblical behaviors.

Jonah is a passive-aggressive leader. They don’t confront, but instead act out their disapproval by procrastinating, forgetting, or just not putting their whole heart into a project. They are complainers who would rather do nothing than attempt something with the possibility of failure – or worse yet, maybe they’ll succeed and then be held to a higher standard. These leaders are not very enthusiastic and can be irritable or impatient and often can explode when their status quo is threatened.

Redeeming Our Dark Side

This third section of the book points the reader to a few specific exercises to help him in living with his dark side and even allowing it to be a positive force in his life. These steps are (1) Acknowledging our dark side (2) Examining the past (3) Resist the poison of expectations (4) Practice progressive self-knowledge and (5) Understand your identity in Christ.

Step one (acknowledging our dark side) consists of nothing more than realizing and agreeing that you are no different from the rest of the people in the world. You have a dark side too.

Step two (Examining the past) is described as a “simple process of remembering.” (pg 163) It entails remembering everything from major issues like a death in the family to minor inferiority issues arising from a nickname you were given as a child. The authors paint the picture of our intentional journey into the past saying “We must become the hammer that begins to shape our errant emotions and dark side rather than the anvil on which our dark side pounds us into a distorted image.” (pg 164)

Step 3 (Resist the poison of expectations) requires our attention to the expectations placed upon us. We should choose which ones we will own and which ones are not a reflection of our calling. If we live our lives under everyone else’s expectations, we will soon be living someone else’s life.

Step 4 (Practice progressive self-knowledge) is about spiritual disciplines involving Bible reading, personal retreats, devotional reading, journaling, and other tools for self-awareness like personality tests, counseling, accountability groups, and performance evaluations. It’s about being open to hear from others (including God) regarding your weaknesses and
dark side.

Unlike any other leadership book I’ve read, Overcoming the Dark Side of Leadership takes an honest and comprehensive look at the part of leadership that no one really likes to discuss. Most books give some insightful ideas about leading and talk about how to influence others, but ignore the reality of all the fallen leaders we’ve seen throughout history. Overcoming confronts this issue head on and allows the reader to be proactive in recognizing his own dark side so as to keep him from falling into these pitfalls. The historical and biblical stories included give the book an authentic feel so as to illustrate the concepts accurately. As I grow in my leadership roles, I intend to make this book an integral part of my life and also for training others for leadership positions. These ideas will help me to remain honest about my own spiritual dark side and hopefully, I’ll respond by being intentional in redeeming it by using some of the steps and concepts this book teaches.