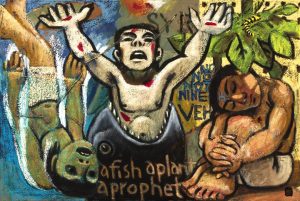 I just found out last night that the Book of Jonah is not about a guy running from God, getting eaten by a whale, preaching to an ungodly nation, and then going into depression. This was a surprise to me, but God didn’t send Jonah to Ninevah to save the Ninevites. God sent him there to save Israel and bring them to repentance!!! If you’re like me, you’re saying, “Huh? I don’t see anything about Israel when I read it.”

OK – here’s how it all works: First of all, let’s make it clear – I believe that the story of Jonah is a REAL story. It’s an actual historic event. In the same way that Ezekiel laid on his side for 390 days to show Israel that God would bear their sin for 390 years, I believe that what happened to Jonah, was allowed by God so that He could show Israel a few things.

Another bit of understanding you need before we launch in to this explanation is this: Over and over the OT prophets have resounded one specific message. “Repentance and obedience leads to restoration and life, while disobedience leads to death.”

Jonah = Israel – He was given the responsibility to take God’s message to Ninevah (Assyrians) just as Israel is supposed to represent God to the entire world. Israel chooses to follow after other gods ignoring their calling. Jonah runs from his calling and ends up on a ship full of foreigners. When the storm came, these foreigners cried out to their gods and sought their help while Jonah slept down below still ignoring God. When the men ask Jonah what they should do, he knows that all that is required is his repentance and obedience, but he chooses to die instead and asks them to throw him overboard. (Remember: in the OT he is “saved” simply because He is a Jew. The law wasn’t given to save them, (they had already been promised a Kingdom), but it was meant only to set them apart and make them holy among the nations of the world.) Anyway, as soon as the fish swallows him, Jonah already knows he’s been saved. When he prays in Chapter 2, he already knows he’s saved. Notice verse 2:8 – He also knows that like him, Israel has chosen death over repentance, but as for him, he now chooses repentance. When Jonah goes to Ninevah (Assyria) the Assyrians repent and are saved. Again, foreigners who are seeking God while Israel is ignoring Him.

Assyria = the great fish – Because they sought God while Israel (Jonah) ran from Him, God allows Assyria to “swallow” Israel in the captivity.

After Assyria is saved, Jonah again chooses death over repentance, just like Israel had been doing for years.

Plant = Jeraboam – God appointed a “little plant” to grow up and offer temporary comfort to Jonah. In the same way, Jeraboam was given a little success to comfort Israel temporarily.

East Wind = Assyrians – The Assyrians come from the east and overtake Israel swallowing them up into their own kingdom.

Remember, this whole story happened before the events of the captivity had occurred. These prophecies and parallels are remarkable considering that. When Jonah gave this message to Israel, they would have picked up on these symbols rather quickly as there are other prophets who had been speaking of these things too who used many of the same phrases and language. (Check Amos and Hosea)

In the end, we can conclude that Jonah was sent to Assyria not to save them, but to bring Israel back this message which was meant to lead them to repentance/obedience and renewal/life.