Our Pastor spoke on these same concepts today, so I thought I’d repost this article from May 3, 2006. Tassels

The LORD said to Moses, 38 “Speak to the Israelites and say to them: ‘Throughout the generations to come you are to make tassels on the corners of your garments, with a blue cord on each tassel. 39 You will have these tassels to look at and so you will remember all the commands of the LORD, that you may obey them and not prostitute yourselves by going after the lusts of your own hearts and eyes. 40 Then you will remember to obey all my commands and will be consecrated to your God. 41 I am the LORD your God, who brought you out of Egypt to be your God. I am the LORD your God.’ “ 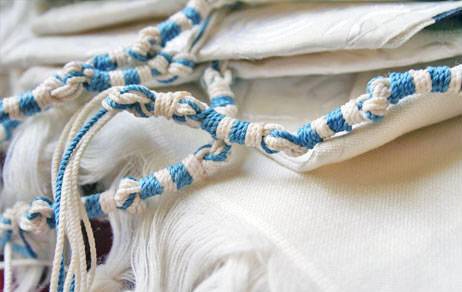 Many Jews wear a prayer shawl today in order to keep this commandment. The tassels today have 5 knots in them representing the 5 books of the Torah (Our first five books) and the four spaces between them represent the four letter for God’s name YHWH. Along the shawl there are also 613 knotted strings to remind them of the 613 laws of the torah.

Now check out Malachi 4 – But for you who revere my name, the sun of righteousness will rise with healing in its wings.

The Hebrew word translated “wings” is “kanaf.” Now what do you think?? This means that the verse could be translated “The sun of righteousness will rise with healing in its ______.” (Tassels.)

Now because of this there was a legend that people began to believe about the coming Messiah which said that there would be some kind of mysterious almost magical healing powers in the tassels of his prayer shawl.

Now read Luke 8 – As Jesus was on his way, the crowds almost crushed him. And a woman was there who had been subject to bleeding for twelve years, but no one could heal her. She came up behind him and touched the edge of his cloak, and immediately her bleeding stopped.

“Who touched me?” Jesus asked.
When they all denied it, Peter said, “Master, the people are crowding and pressing against you.”

But Jesus said, “Someone touched me; I know that power has gone out from me.”

Then the woman, seeing that she could not go unnoticed, came trembling and fell at his feet. In the presence of all the people, she told why she had touched him and how she had been instantly healed. Then he said to her, “Daughter, your faith has healed you. Go in peace.”

Pretty cool huh? Did you catch it? The woman believed the legend and actually touched Jesus’ “tzitzit,” His tassles, His “kanaf.” In her actions she was proclaiming that she believed He was the Messiah. This is why Jesus was so quick to say “Your faith has healed you!” Her action alone was a huge expression of faith.