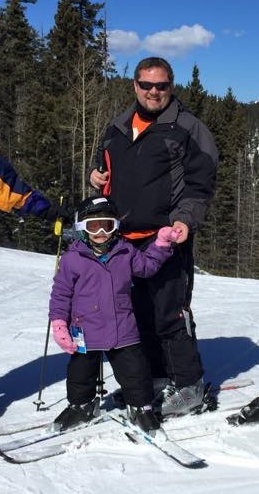 While skiing during Spring Break, Kesleigh hit a tree with her head! She was flying down the slope and was out of control, but she was too scared to just lay down and fall. Instead she sped down the slope, crossed another run and ran straight into a tree. As a dad, I watched in horror  and screamed. My heart sunk as her head bounced off the tree. She was wearing a helmet, but I could see her little eyes close as she fell to the ground and then she didn’t move. I imagined the worst. Was she alive? Was she paralyzed? I was there in just a couple seconds, but those seconds were long, difficult, and frightening. She was conscious. She was crying and scared, but she was alive and appeared to be functioning in every way. I was relieved and thanked God as I grabbed her little body and held it close to mine. I just held her for a while. I was grateful for helmets. Hers had a dent about the size of a softball on it.

Someone came by on a snowmobile and asked if we needed Ski Patrol. I declined and said that I thought she was OK. I was right. She was OK physically, but emotionally, she was not OK. She didn’t want to ski again. She was done and I must admit that I understood why. She had experienced something that would have shaken anyone.

Together, with many tears, and at a very slow pace, we worked our way back down to the lift and then back to the house where we were staying. She opted out of skiing the rest of the day. I didn’t blame her.

The next day, she wanted to try again and so we went out with her cousins and everyone. She was a different skier. A slower skier. A more controlled skier. Unfortunately, at her new pace, she couldn’t keep up with the rest of the group. We had to let them go on without us and so she cried. Grandma stayed with me as I watched over Kesleigh. She didn’t enjoy herself that day. She was sad that everyone went on without her, but she was too scared to speed up. She cried that her legs hurt. She whined saying she couldn’t go any further. She laid on the slopes and refused to get up over and over again. I don’t think she smiled the whole time we were on the mountain together. Skiing was not fun for her anymore. As her dad, that broke my heart, but I must admit that I was not having any fun either. I was growing weary and impatient with her whining and complaining. Yes, I knew she came by it honestly, but I also knew her potential, and I didn’t want to let her settle for staying home and not skiing. She had already fallen in love with skiing and I didn’t want to allow her to deprive herself of all the fun she could have simply ’cause she was scared. Fear can do that, but I felt like this was a perfect time for a lesson in perseverance. (It would test my own as well.)

For the rest of the day, we struggled. She didn’t want to stop, but her pace, her whining and complaining and crying made me want to stop. Even grandma grew weary and tired of Kesleigh’s attitude. When we got home at the end of the day, my mom told me that she thought I should win the “Best Son” and “Best Daddy” award for staying back and watching over them on the slopes. I was shocked ’cause I didn’t feel like I had been a good dad at all. I was really feeling impatient and tired. I felt like I had been short with Kesleigh and maybe even pushed her too hard a few times. Mom thought I had been patient, but mom didn’t know the thoughts that I had been fighting all day.

Here’s what I realized. I can be really patient and I don’t mind going slow when there is effort being made. As long as we’re moving forward, I’m OK with slow and methodical. I struggle when there’s complaining and whining and excuses. At those times, I’m not patient at all. I just want to keep moving forward and none of those things helps the process so I grow weary and lose patience.

Here’s my plea: If you need someone to be patient, put forth some effort. Don’t whine, complain, or make excuses. Just keep working toward the goal.

I can be patient when there is effort. I think we all can.

PS – The 3rd day, Kasen chose join us to help his sister and she did much better. By the end of that day, Kesleigh was back to her normal pace, but wiser with controlling her speed. That’s my girl!!! Proud of my boy too for sacrificing some of his ski time to help his little sister.

Yeah – we’ve decided to do our nursery with a rainforest theme. We decided this before we knew if Kasen was gonna be a boy or a girl. The plan was that if it turned out to be a girl, we’d add butterflies and flowers, and if it was a boy we’d add monkeys and bugs. Anyway, we painted the room a really bright green pretty early on after we found out Miranda was pregnant. One of the youth (Montana) helped us get it painted. She did a GREAT job too – there’s only one problem – once we got it on the wall, we realized how bright it really was. Almost scary bright if you know what I mean. (By the way, the picture here doesn’t really show how bright it is – it’s so bright that you can see a green glow on the opposite white wall in the hallway.) Anyway, our hope was that when we started putting other things into the room, it would calm it down a bit. (Note: I really wanted bright colors instead of the typical pastel baby colors that are normally used.)

All this is to say that we worked a whole lot last week in cleaning things out of the closet so we could begin turning it into the nursery that we want. We got out all the stuff that people have already bought and moved a dresser into the room along with some fake trees that we bought. Anyway, things are coming together. My mom, sister, nephew, and niece came in town too and they helped us pick out some of the stuff. Mom even helped us figure out how to do some curtains (she’s gonna make them) and make them match some linens for the crib. (She’s gonna make those too)

Closets – so as I cleaned out the closet where Kasen’s nursery is gonna be, I found all kinds of fun stuff. That particular closet had become the “Steve’s old treasures” closet. I threw away quite a bit – a CD player, a DVD player, a set of speakers, and a few other things. But I also found some other stuff that brings back great memories for me.

My rock collection (yeah – you never knew I was one of “those” guys did you?)
Star Wars collector’s cards (I have the entire “Empire Strike Back” collection from when I was really little – I wonder what I could sell it for on E-bay?)
Sheet Music from Texas Wesleyan
School Yearbooks from Jr. High and High School
Old Bibles
My Tape collection – Yes – I’m that old – I remember when I bought my first CD and it was long after I started collecting music.

Anyway, all of these things bring back all kinds of memories for me. They have helped to make me who I am today in one way or another. Of course they don’t even come close to the influence that God or my family has had on me, but regardless these things still have still shaped me and the way that I think. As I cleaned out this closet, I wondered what kinds of things would be collected these for Kasen.

I wonder what things we’ll dig out of his closet one day? I wonder what things will help to shape him?  I prayed over that closet. I prayed that the things which end up in that space, will be things which we have intentionally placed there. Things which we chose for him ’cause we knew they’d have an impact on who he becomes. I pray that God will give us wisdom in choosing these things. I also pray that it won’t become a place where we just throw stuff that we really don’t care about. (‘Cause I think that has an impact too – it’s just not an intentional one – it’s not an impact that you chose for yourself.)

Wow – all this just over a nursery closet – what have I gotten myself into? I’m not ready for this whole parenting thing. If there’s this much to think about over a closet – how will I ever think through everything else in his life in the way that I should?

God – I need you! Please guide me. Show me your desires for Kasen. I know you will provide, but help me to be a good steward and make the right choices which would help him to grow up in such a way that he comes to know You. In a way that he would choose to serve You. Keep my bride safe and healthy as she carries Kasen for these next few months. Hold him close to Your heart and continue knitting him together in the way that You see fit. Create him inside Miranda. Mold him into a man who will honor You with his life, his words, his decisions, his everything. – by the way, mold me to be that way too – AMEN!

Here are some fun pics I found on-line of different Jesus sightings. 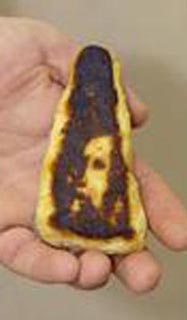 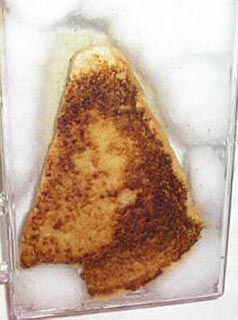 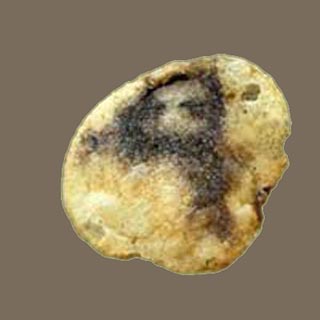 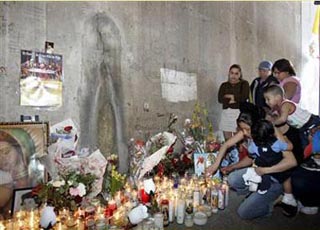 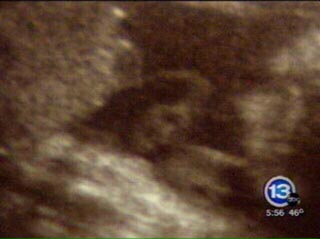 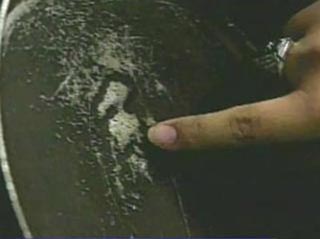 Oyster Shell Jesus. (Not sure I can even see this one. – Maybe “Modern-art-oyster-shell-Jesus”)

Jesus on a Door. 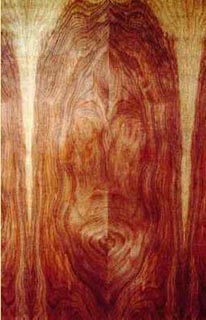 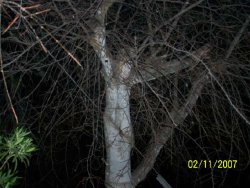 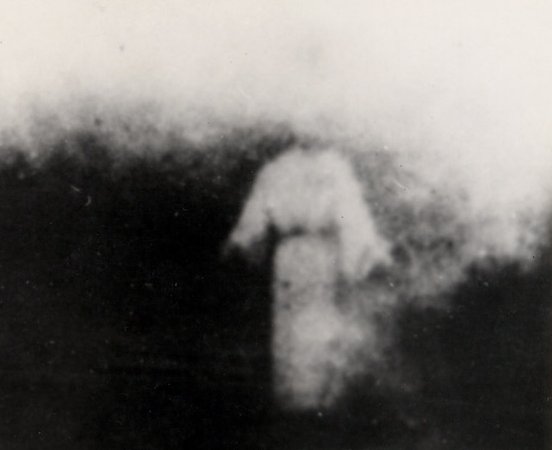 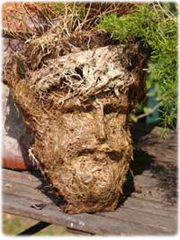 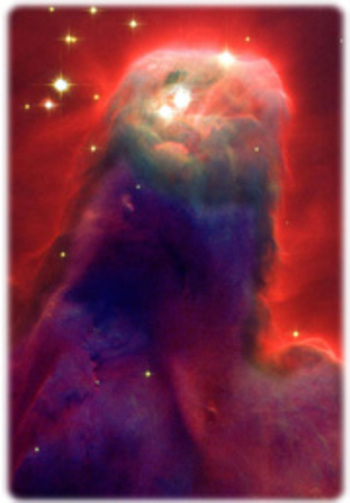 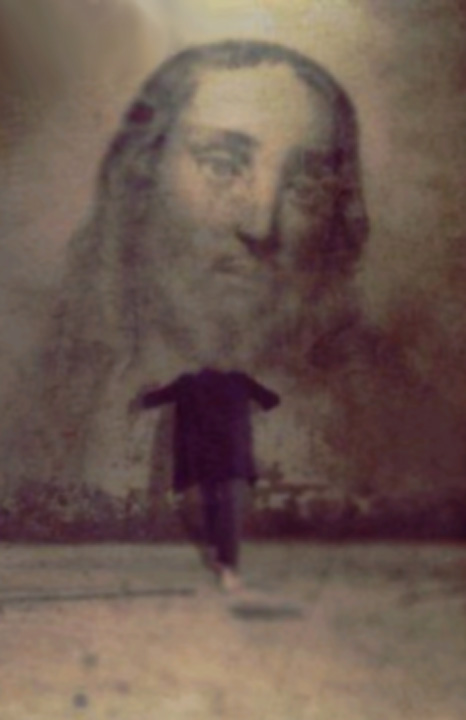