Thank you to Sarah Manning who first shared these ideas with a women’s group from our church. (Grace Bible Church, Clute TX) 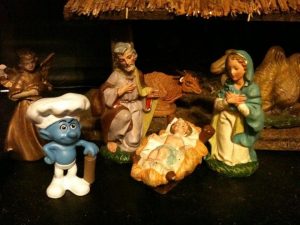 Here’s a pic from my house a few years ago. My daughter, Kesleigh (now a 7th grader) decided that she wanted a smurf in our nativity. He sorta looks like a shepherd right?!?! Over the years we’ve had lots of different characters join our nativity – Lightning McQueen, Larry the Cucumber. . . you name it.  I guess the truth is we all have some unwanted guests in our nativitys. They might be people, but grief could be an unwanted guest too, or disappointment, or feelings of inadequacy. Are there some people or circumstances this year that just “aren’t right?” Christmas can be hard – really hard. Maybe you’ve lost someone and Christmas is just gonna be hard. Maybe you’ve been forced to rethink your finances and you can’t do Christmas the way you’d like to. Maybe you’ve got crazy people in your family and getting together just isn’t enjoyable anymore. Whatever it is: You’ve got a dragon in your nativity.  Yes – I said a dragon – big and overbearing, disgusting. Maybe your dragon spews fire with its’ words, or lurks around the season looking for the moment to break in and destroy something. Or maybe he quietly torments your innermost thoughts.

Dragons. We’ve all got ‘em. I’ve got a dragon in my nativity too. This year will be one of the first Christmas’s since my brother passed away. We’re going to have some tough moments and there’s no question that my sister is gonna cry over it at some point.  There’s a dragon in my nativity too. He doesn’t belong. He seeks to destroy our celebration and ruin the whole thing. He will sneak into our celebration to try to have his way with us.

But here’s the thing. Maybe you never knew it, but there’s a dragon in the real nativity too. Revelation 12:1-6 describes a pregnant woman who is about to give birth when a dragon appears and waits so he can “devour the baby the moment he is born.” The dragon stands there ready and waiting to bring destruction. However, the child is saved and then the woman goes into the wilderness.

This is the Bethlehem story. Herod is the dragon. He plots with the wisemen so he can discover where Jesus is and go kill him. When the wisemen don’t fall for his scheme, he decides to kill all the babies under the age of 2, but God warns Mary and Joseph and they flee to the wilderness of Egypt for a while.

There was a dragon in the first nativity. His name was Herod.

The dragon in the Moses story is the Pharaoh who tries to kill all the Jewish babies. Of course God makes a way for Moses to live and eventually rescue the people.

In the garden of Eden, the snake tempts the woman and seeks to bring destruction upon she and Adam. (Which by the way, Genesis 3 says the woman’s offspring will destroy the serpent.)

In the other garden where Jesus prays the dragon reveals himself as Roman soldiers who arrest Jesus and begin the process which would lead to His death on the cross.

I’m going to steal his quote and change it, but here’s what I believe.

You have a dragon in your classroom. It’s exactly the same dragon that’s in my classroom. And by the way, it’s not the kid that popped into your mind. The dragon is the fear, sin, death, and destruction that surround that kid. It’s the evil that influences him and the evil that he allows to control him like a puppet.

The true dragon slayer doesn’t destroy people. He captures hearts and works diligently and sacrificially to destroy the fear, sin, death, and destruction that influence and them. During the worst possible situation, on the cross, enduring unimaginable torment, Jesus isn’t angry with his captors. He actually says “Forgive them, for they know not what they do.”

Jesus’ attitude in that moment is compassion. He doesn’t actually do it, but when I reflect on this whole thing, I hear “Capturing Kids Hearts” questions with Jesus saying, “What are you doing? What are you supposed to be doing?” It’s a compassionate response, but forces our students to own their behaviors.

The point is, Jesus doesn’t destroy the people who are trying to destroy Him. Let’s be clear. He could have destroyed them with just a word, but the people aren’t the dragon. The true dragon was Jesus’ objective. The dragon is the fear, sin, death, and destruction that controlled those people. The people are just puppets under the influence of the dragon.

And here is the good news!! If you go back to that passage in Revelation, you see it too. The people triumph over the dragon, “by the blood of the lamb.” Yes! We win!! Jesus, our knight in shining armor, withdrew His sword (which according to Heb 4:12 is the Word of God) and conquered the dragon. On the cross He stepped into death and then walks out of the tomb defeating the dragon. The power of fear, sin, death, and destruction had no hold on Him. And when we walk in faith, it has no hold on us either.

Yes – there is a dragon in my nativity, and in my house, and my classroom, and everywhere I go, BUT there is also a dragon slayer named Jesus who was born, and lived to destroy that dragon. And now by faith, the dragon slayer lives in me, and you, and all of those who call on His name.

Whatever dragon you encounter this season and whatever power it holds on you, remember that you have a greater power, a dragon slayer. He is just a prayer away. He has already defeated your dragon and empowers you with a sword of your own – the Word of God.

Romans 8:37 “We are more than conquerors, through Him who loved us.”

Here’s a great video that goes with this message too: