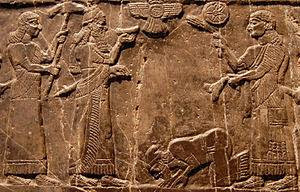 Before we launch right in, I’ve got to lay some groundwork. There are two types of treaties that are common in early Biblical times:

1) A parity treaty – an international agreement/covenant between two equals

In a parity treaty, each king (similar in strength and size) commits to protect and help the other. A king of a city/state may have several parity treaties going at once.

The suzarain/vassal treaty is a bit more nuanced. The suzarain (greater king) commits to protect and look out for the interests of the vassal (lesser king), as long as the vassal pays tribute and looks out for the suzarain’s interests. Since the vassal has so little power in comparison, he is at the mercy of the vassal and must be careful to adhere to his commands precisely. In this treaty, the vassal must remain loyal to the suzarain and would be considered treasonous if he made any other treaties.

Now that we’ve laid that groundwork, let’s start (like Sandra Richter does in her video series Epic of Eden) with Joshua 9 – The Gibeonite Deception. God has been using Joshua to conquer the promised land. The people in the land are hearing stories about how God is empowering Joshua and they are fearful. Several kings have joined together to defend themselves against Joshua. (These would be parity treaties among similar lesser city/state kings.) Gibeon is one of the city-states involved with this group, but they have decided to try to work out a new deal.

In Joshua 9, they venture off on their own with a plan to deceive Joshua and make a suzarain/vassal treaty (vs 9:6) with him. In vs 11, we read that they  tell Joshua, they will be His servants. (This tips us off that they are seeking a suzarain/vassal treaty.) Unfortunately, Joshua doesn’t consult God and he ends of falling for their trick. (He wasn’t supposed to make any covenants with people in the promised land.) Believing that they were from another country a long way off, Joshua makes a covenant with them in vs 15. When He realizes that he had been tricked, he was upset, but since he had made the covenant before God, he had to honor it. Now, when the other city-states discover what Gibeon had done and realize that they will no longer be able to fulfill their parity treaty commitment/covenant with them, they are rightfully angry. Gibeon had committed treason against them. Joshua 10:1-4 explains that  this alliance of kings decide to attack Gibeon. This puts Joshua in a precarious position. As the suzarain, he must defend and protect his vassal (Gibeon) even though they had tricked him into the treaty. In the end, this is how God continues the campaign to conquer the promised land. These kings are defeated and Israel advances forward in the conquest of the promised land.

This is a great story on its own, but pay attention to the role that the treaties played and how they influence the lives of the ancients. A covenant was serious. It meant risking your life to defend those with whom you had committed. In the suzarain/vassal treaty, it also meant complete and total loyalty to the suzarain.

Here’s the format of an ancient treaty:

1) Preamble/Title – Suzarain is introduced. No one cares about the vassal.

2) Historical prologue – Suzarain records all the things he has already done for his vassal.

3) Stipulations/Obligations imposed – this is where the responsibilities of the vassal are spelled out – sending tribute, sending armies for support, and absolute loyalty (more than one suzarain and you have committed treason

5) List of witnesses – most of the time, these lists were gods and since most were polytheistic, there were many pages of witnesses.

6) Curses and Blessings – Listed the benefits of keeping the treaty and the consequences of breaking it. A suzarain used this section to threaten the vassal if they ever rebelled.

There were always two copies of the treaty drawn up – one for each party. They would then be placed in their respective temples because these oaths were made before their gods.  (those listed as witnesses in the treaty)

Now, with this structure in mind, let’s look at Moses, Israel, and Mt Sinai.

Moses is on top of the mountain and that’s the story, but for a moment, let’s also consider the Israelites at the bottom of the mountain. All they have ever known (and their grandparents for generations) is slavery and the polytheism of Egypt. They are considering monotheism, but are probably skeptical and tentative about it. They have most likely heard of Yahweh and Abraham, but probably couldn’t explain this faith to anyone. They are God’s chosen people, but their choice to leave Egypt was quite possibly more about getting out of slavery than it was about becoming God’s people. God chooses Sinai as the place to try to explain who He is to them. They’ve seen Him deliver them through many miracles, but in this place God will describe His expectations of them. How can He do that to this secular ungodly rabble of a people? What can He say that will make sense to them?

He will use this form and a model which they would have already understood – the suzarain/vassal treaty. God speaks to them and reveals Himself in a way that would have made sense. The context of this model, helped them to see the implications of His words and allowed the message to be more clearly communicated/understood.

God chooses Sinai to make a treaty with Israel. He will be their suzarain. He is great and mighty and will work on their behalf against their enemies even though they have little to offer. They are just a crowd of people with no home, no land, with very few possessions. They are wondering the desert. They are vulnerable and exposed, easy prey for attackers. They are spiritually confused and are swaying between worship of Yahweh and worship of the Egyptian gods they had known all their lives. However, God chooses them.  He acts, before He requires anything. At Sinai, we see the grace of Yahweh. Many think Yahweh is different in the OT from what we see in the NT, but we see grace throughout the whole of the Scriptures. The Law itself is grace. It will set them apart and keep them healthy. It will lay a foundation for their future and set boundaries that will lead to success. The Law is an expression of love as it offers these homeless, broken down spiritually confused slaves an opportunity to become a people, and not just a people, but THE people – the people of God. He calls them into a relationship before the rules are made . . . . much like we are wooed and courted into relationship before the rules get changed when we can’t have any other boyfriends/girlfriends. By that time, your desire is to make those changes, you want to change, because your relationship is so important. The relationship outweighs the responsibilities. It doesn’t feel like a requirement as much as an opportunity. A child is loved first and then disciplined for the same reason. Sinai doesn’t happen until after the people have been delivered from slavery.

Compare the format of a Suarain/Vassal treaty to that of the Covenant at Sinai. It’s clear that God was speaking to them in the language of treaty.

Once the treaty was drawn up, the people had a ratification ceremony or covenant ceremony to bind the oath. This is the way they signed the document in front of their witnesses. Since this oath was made before their gods, animal sacrifice was always a part of the covenant ceremony.

Exodus 24:3-8 – Moses sprinkles blood from the sacrifice on the people.

New Covenant – Matthew 26:27-28 – Jesus reminded the disciples of Moses and the old covenant during the Last Supper which celebrated the Passover.

Here are the Hebrew letters

and here is what each letter means:

I posted this ’cause I’m amazed by the variety of ways that God has chosen to speak to us. He spoke to Israel in a way that they would understand, and He does the same for each of us. How is He speaking to you today?

I had some thoughts today – Miranda and I started our life together with a dance on our wedding day. Pretty early on in our dating life, we danced together. As we start this new part of our lives with Kasen, it kinda seems like another dance. We’re still learning the steps, and how to move together, but it sure is a fun song to dance to. And I’ve got the best dance partner in the world. I feel like I’ve been writing and praying about the kind of dad that I wanna be, while all along, Miranda is already everything a mom should be. She’s been so good with Kasen. I am so blessed to have her and I’m having lots of fun watching her “mommy-instincts” kick in. She’s incredibly patient and functions really well with almost no sleep. She continues to provide a beautiful home for us and smiles every time I come through the door. (Well, almost every time.) I like calling her “my beautiful bride” and today she is still the most beautiful girl in the world. The same girl I danced with on my wedding day. I see it as my job to help her realize how beautiful she really is. Someday, I’m gonna get her to say the words, “I’m beautiful.” and in that moment, I will have been a part of something really incredible – she will finally have seen herself the way the rest of us have always seen her.

Prayer:
Lord as we learn these new steps together, please be with us. We’ve already shed a few tears and I’m sure there are more to come, but we’ve also known You’re with us through it all. Comfort us. Give us patience with one another. Send people into our lives to bring encouragement and love. Hold us in Your hands God – close to Your heart. As Miranda holds Kasen, let us realize Your presence and closeness. Lord, on our wedding day, we had a multitude of people pray over us and I claim those prayers today over our lives. I’ve never felt closer to Miranda than I do right now, but I also know that things will never be the same. As we make this transition, guide us. Show us how to not only maintain a healthy relationship, but how to grow it even as we are being pulled in other directions with Kasen. God, we need You. We trust You and we will walk with You. Hold our hands and go before us. AMEN.

The rocks in the vase to the right are the rocks from our wedding day. Each one was held by a friend or family member and a prayer was said for our relationship and marriage.  This vase sits on the table of our entry way so that each day we will be reminded of the love and support of our friends and family as we strive to live out the promises we made to each other on that day. With the addition of Kasen to our family, I am claiming by my friend Evan’s “transitive property” that these prayers were also for him.