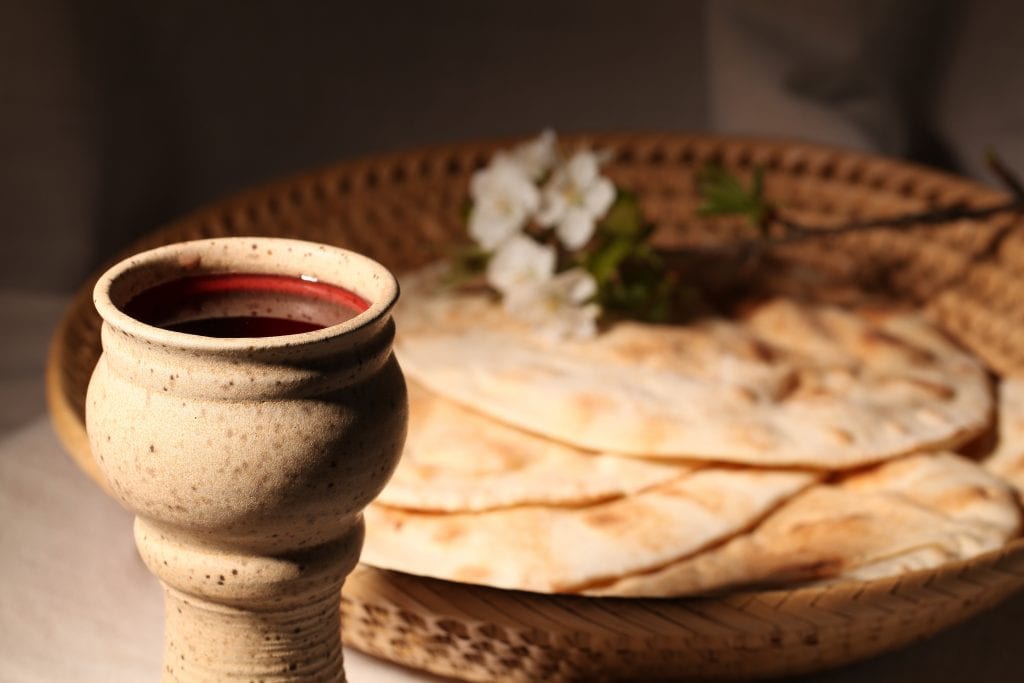 On Thursday of Holy Week, Jesus celebrated a traditional Passover meal with His disciples. (well… maybe not so traditional) He sent John and Peter ahead to get the meal prepared. When they arrived the disciples thought it was just gonna be “business as usual.” They had celebrated the Passover meal every year for as long as they could remember. They knew how it worked, but Jesus was about the change it up.

At the beginning of the meal, the host (usually the father in a home) washed His hands to purify Himself to lead. However, Jesus didn’t need to purify Himself so He started changing things up from the very start of the evening.  Jesus took the basin and towel and used it instead to wash the feet of the disciples telling them that they should serve others as well. At this point, it probably become more clear that Jesus would be doing the Passover differently.

God had instituted the Passover meal to help Israel to remember what He had done during the time of Moses and the Exodus. They remembered the 10 plagues that God sent upon Egypt – including the lamb which each household sacrificed in order to put its blood on their doorways so the angel of death would passover them. The blood of the lamb had saved them. They ate bitter herbs to remember their lives as slaves in Egypt. They ate a sweet mixture of fruit, honey, and nuts, and recognized that God had been present with them even in those bitter times.  He brought a sweetness to their lives even in the midst of slavery. They dipped vegetables in salt water to remember how God had brought them through the Red Sea.

After the meal, they ate unleavened bread to remember how God had miraculously provided “bread from heaven” (manna) for them to eat in the desert. In those moments, they said a blessing over the bread, “Blessed art thou OH LORD, our God, King of the universe, who brings forth bread from the earth.” In this blessing they remembered the manna, but it also pointed forward to the fact that Jesus himself (Bread of Life) was about to come “forth from the earth.” In just a few days, He would be resurrected and come out of the tomb!

Immediately following the bread, the traditional meal required them to drink a cup of wine called the “Cup of Redemption.” This cup and the color of the wine was intended to remind the Jewish people of the blood of the Passover lamb that had been sacrificed for their salvation. Jesus deviated from the usual way of doing this meal when He told them to drink it in remembrance of Him. It had always been in remembrance of the lamb slain in the original Passover. However, this would be something new. The new covenant which Jesus instituted that night would still celebrate the blood of the Lamb, but this lamb was Jesus Himself. There is Jerusalem, just that same week He was in the midst of choosing a path which would lead Him to the cross. There, he would die for the sins of the world, sacrificing Himself so we can be in relationship with God.

(Sidenote: The Cup of Redemption was also used in their culture as part of weddings. When a man chose a bride, He said “Will you marry me?” by offering her the cup. Drinking it was her way of saying, “Yes!!” – When we drink of the cup in communion, we are agreeing to live our lives married to Jesus and His ways. It’s an incredible offer – to become a part of the Family of God)

After the Passover meal, Jesus prays for His disciples (those present with Him and those who will become disciples later on)  and then He the disciples make their way to the Garden of Gethsemane where Jesus spends some time praying. It’s not long before Jesus is officially betrayed by Judas and then is arrested.

Download a Guide I wrote to the  Passover Meal here:  Passover Haggadah

My Second Marriage – An Ancient and Future Wedding