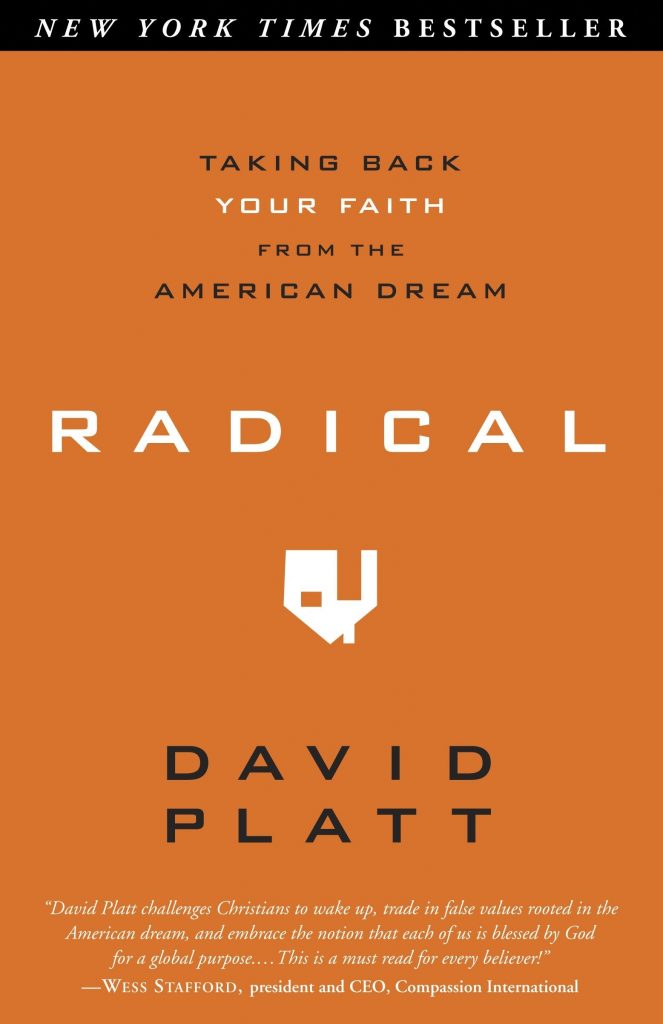 David Platt’s book “Radical” has been a great book for me! As Miranda and I have struggled this past year with our finances, (I’m still looking for a full-time job) we’ve learned much about what it means to trust in the LORD for our needs. We’ve learned new spending habits (well…non-spending habits). And we’ve both been feeling called to give more. It’s a crazy time to begin feeling this calling so strongly, ’cause it’s also the time where we’re pinching pennies more than ever before. This book has really pointed out some of the things we’ve already been learning and made the concepts much more concrete. Even in the midst of unemployment, we are choosing to work on some of these principles and to give in spite of our situation. After all, as Platt explains, “I don’t think God will ever say, ‘I wish you would have kept more for yourself.'” Anyway – pick up the book and read it. You won’t regret it. Well. . . maybe you will regret it temporarily as God interferes with your “American Dream,” but in eternity, you won’t regret any of it.

My favorite parts of Radical:

Jesus’ spent his life with 12 guys. He ran people off who were “ready” to follow Him. When he finished His ministry there were only about 120 who were actually doing what He asked of them.

Luke 9 – Jesus turns 3 different people away saying, (1) “You’ll be homeless.” (2) “Let someone else bury your dad.” (3) “Don’t even say goodbye to your family.” – Jesus persuaded them NOT to follow him. David also tells a story about one of his mentors who began a talk saying, “My goal tonight is to talk you out of following Jesus.”

Quote: “The modern-day gospel says, ‘God loves you and has a wonderful plan for your life. Therefore, follow these steps, and you can be saved.’ Meanwhile, the biblical gospel says, ‘You are an enemy of God, dead in your sin, and in your present state of rebellion, you are not even able to see that you need life, much less to ’cause yourself to come to life. Therefore, you are radically dependent on God to do something in your life that you could never do.”

Requirements for discipleship include: Hate father, mother, sister, and brother. Hate even your own life. Carry your cross and follow Jesus. Give up everything. Drop your nets, your careers, your families & friends. – Compare this to the modern: Admit, believe, confess, and pray a prayer after me.

Quote: “This is where we come face to face with a dangerous reality. We do have to give up everything to follow Jesus. We do have to love Him in a way that makes our closest relationships in this world look like hate. And it is entirely possible that He will tell us to sell everything we have and give it to the poor. . . . We rationalize these passages away. . . And this is where we need to pause. Because we are starting to redefine Christianity. . . We are molding Jesus into our image. He is beginning to look a lot like us. . . And the danger now is that when we gather in our church buildings to sing and lift up our hands in worship, we may not actually be worshiping the Jesus of the Bible. Instead we may be worshiping ourselves.“

The cost of discipleship is high, but the cost of non-discipleship is even higher. “Consider the cost when Christians choose to ignore Jesus’ commands to sell their possessions and give to the poor and instead choose to spend their resources on better comforts, larger homes, nicer cars, and more stuff.” David tells a story of 2 headlines side by side: (1) “First Baptist Celebrates $23 Million Building” and (2) “Baptist Relief Helps Sudanese Refugees” ($5,000 – not even enough to get a plane into Sudan.)

Matthew 13 – Sell everything to purchase a the field with the treasure in it. No matter how crazy people think you are for selling all your stuff, you sell it anyway, ’cause you know about the treasure that awaits you in heaven.

Story: Preaching Professor who takes students to graveyard and asks them to speak over the graves and call people from the ground to rise up and live. After some awkward moments, he reminds them that this is the exact thing God has called them to do – call the spiritually dead to life. Only God can do such a thing.

Quote: “God beckons storm clouds, and they come. He tells the wind to blow and the rain to fall, and they obey immediately. He speaks to the mountains, ‘You go there,’ and he says to the seas, ‘You stop here,’ and they do it. Everything in all creation responds in obedience to the Creator…until we get to you and me. We have the audacity to look God in the face and say, ‘No.’“

When Jesus says in the Garden of Gethsemane, “My Father, if it is possible, may this cup be taken from me.” He is NOT speaking of the cross, but of the “Cup of wrath” (2nd Cup in the Passover). He is not fearful of the cross, but is sweating blood as He considers all of his own Father’s wrath, for all of mankind throughout the centuries being poured out upon him.

Story: Preacher describing the wrath of God in this way: Imagine your standing a mere 100 yards away from a dam which is 10,000 miles high and 10,000 miles wide. The dam breaks and the water rushes toward you. In the last moment, a hole opens up at your feet and swallows all the water. At the cross, Christ drank the ‘cup of wrath’ which was meant for us.

Quote: “Suddenly contemporary Christianity sales pitches don’t seem adequate anymore. Ask Jesus to come into your heart. Invite Jesus to come into your life. Pray this prayer, sign this card, walk down this aisle, and accept Jesus as your personal Savior. . . We have taken the infinitely glorious Son of God, who endured the infinitely terrible wrath of God and who now reigns as the infinitely worthy Lord of all, and we have reduced him to a poor, puny Savior who is just begging for us to accept him. Accept him? Do we really think Jesus needs our acceptance? Don’t we need him?”

Matthew 7:21-23 – Not everyone who says to me “Lord, Lord” will enter the kingdom of heaven. – Jesus was speaking to the religious people. Many people will be shocked.

The only proper response to the gospel is much deeper than a prayer, a “decision,” or an intellectual assent. It is a total surrender to an infinitely worthy Savior – Jesus. “We are saved not just to be forgiven of our sins or to be assured of our eternity in heaven, but we are saved to know God.”

Quote: “Where in the Bible is missions ever identified as an optional program?” It’s for everyone. No one can say, “I’m not called to missions.”

We like to interpret Scriptures how they suit our own preferences. For example: When it comes to the responsibilities given to us in the Great Commission (Matthew 28), we say it’s just for the people who are “called,” but when Jesus offers to give rest to the weary and burdened (Matthew 11:28), we claim it’s for everyone. We like the “abundant life” verse (John 10:10) and claim it as our own, but write off Acts 1:8 (“you shall be witnesses”) as something only for those who are “called.” Or we rationalize it saying, “Well Jesus was only talking to the disciples.”

We should listen to Scripture in order to reproduce rather than just to receive. It’s the difference between watching a football game as a fan or watching like a coach watches – examining the opposing team’s formations and strategies so he can be better prepared to use what he learns when they play again.

Materialism is a blind spot in American Christianity, much like slavery was. Christians in the future will look back on our generations and probably be ashamed of our selfishness.

Wealth can be a barrier to God.

Story: John Wesley makes a purchase: [Wesley] had just finished buying some pictures for his room when one of the chambermaids came to his door. It was a winter day and he noticed that she had only a thin linen gown to wear for protection against the cold. He reached into his pocket to give her some money for a coat, and found that he had little left. It struck him that the LORD was not pleased with hos he had spent his money. He asked himself, “Will thy Master say, ‘Well done, good and faithful steward?’ Thou hast adorned thy walls with the money that might have screened this poor creature from the cold! O justice! O mercy! Are not these pictures the blood of this poor maid?“

We should put a financial cap our lifestyles.

Quote: God won’t ever say, “I wish you would have kept more for yourself.”

How we could start over and build our lives on the necessities rather than the luxuries? In America, we think things are necessities that others would consider luxuries.

Quote: “Franklin Roosevelt was emphasizing how Americans will postpone immediate gratification and even endure hard sacrifices if they are convinced their future will be better than their past. Americans are willing to take great risks, he said, if they believe it will accomplish great reward.” I’m not sure this holds true anymore. Seems to me like Americans have a tendency to always go for immediate gratification.

We like to say that there’s no safer place to be than in the center of God’s will. What if God’s will was the most dangerous place to be? Would we still want to be in it??

Here’s another post which was inspired by this book: Troop Carrier or Luxury Liner?

Matthew 10 – God even takes care of the sparrows. Why wouldn’t He take care of us??