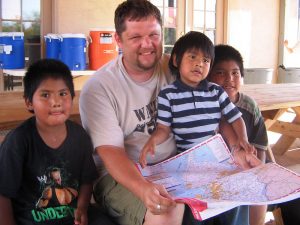 Our mission trip to Arizona was amazing!!! We took 28 people to the Tohono Oodham Reservation to work with children doing VBS. Our youth had to learn to give their testimonies and present the gospel in order to attend. Once we arrived on the reservation we were split into 3 different groups who each traveled to separate villages to do ministry. My team went to the village of PiaOik (sounds like Bee-oik). Anyway, this village was abandoned by the Catholic church about 15 years ago and we were the first people to do any sort of official ministry in the village since that time. That means that some of the children we worked with had never heard the name of Jesus. Some had heard through their families, but unfortuantely, much of what they knew was a mixture of Catholicism and native tradition. Anyway, it was truly a pleasure to get to know these kids and to tell them about Jesus.

For me, one of the biggest experiences happened the last day we were there. Well, it started the first day, with a little girl (3 yrs old) named Sadie peeking around the door of her house at these strange white people who were inviting her to VBS the next day. It was obvious that she was a little scared of us, but interested. The last day, as our van drove around the curve of the road, we could see Sadie, literally jumping up and down waving at us as we arrived. The transformation we saw in Sadie was a beautiful hint that we had certainly won her over and I feel confident that we had an impact on her. Sadie’s transformation was duplicated in each of the kids we worked with. Chelyssa, Listen, Jayden, Brent, Sidney, and Colin.

Life on the reservation was also very eye-opening. The average income is just under $7,000/year. (Lake Jackson FUMC averages $100,000/year) Most people didn’t have running water and still used outhouses. The kids only go to school 120 days a year (as opposed to our 180) which means that the few who graduate will still only have an 8th grade education. Many don’t graduate ’cause it’s sometimes a 2 hour bus ride to get to school. When they do graduate, they struggle at a college ’cause they’re so far behind academically and so most end up coming back to the reservation to live. The reservation is the largest crossing point for drug traffic and mexican illegals and so Border Patrol presence was everywhere. We also met the gang task force leader on the reservation. Because of the environment in which they live, gang activity is rampant. He has a staff of 4 in a huge area which has more gang activity than most states. 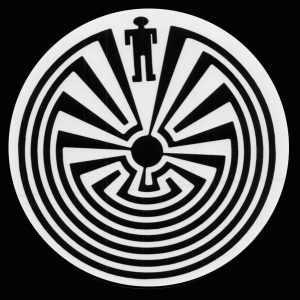 The native religion worships a god called I’Itoi. He is believed to have led the Tohono people into this world from the underworld and when someone dies, he leads them back from the light into darkness.  They use a symbol of a man in a maze to depict it.

Interestingly enough, the grandfathers also speak of a time when their people worshipped the “Creator God.” They say that in those days (less than 100 years ago) the land was much more fertile – even describing walking through grasses that were waist deep. Today, however it’s just desert – dry, dusty, nothing but cactus. Anyway, they have a legend that says that when the Tohono people go back to worshipping the “Creator God” there will be “Streams in the Desert.” Isaiah 43:19 also speaks of Streams in the Desert when Jesus returns. It’s amazing to me that two totally different cultures are saying the same thing. God reveals Himself all the time in so many ways if we’ll just listen.

Anyway, all this is to say, that it was a great trip! We got to learn alot about the Tohono Oodham culture, and we got to tell them about Jesus. Our group also had the chance to bring a slip-n-slide to PiaOik the last day. The kids had a blast on it. In the desert, there was no grass so we slid across the concrete bastball court. We also had fun watchin fireworks on the fourth of July which were lit by hand about 50 yards from us – I kept wondering what would happen if someone accidentally knocked one over in our direction. We also had “Hampster Races” on a T.O. ranch one night. You’ll have to ask someone about that one.